Navigating through the Coronavirus Outbreak with CFDs

“A stock market decline is as routine as a January blizzard in Colorado. If you’re prepared, it can’t hurt you. A decline is a great opportunity to pick up the bargains left behind by investors who are fleeing the storm in panic”

The World Health Organization (WHO) has declared a global health emergency over the coronavirus.  As at 10 Feb 2020, Covid-19 has killed more than 900 people in China and infected thousands worldwide.1 Covid-19 has sent shockwaves through the financial markets. Hong Kong and Singapore, whose economies are highly dependent on trade and global fund flows, are bound to see their economies impacted negatively.

No one can predict when this outbreak will end or the magnitude that financial markets will be impacted. What we can do, however, is focus on the things we can control.

Infectious Epidemics and Past Market Performance

“History doesn’t repeat itself, but it often rhymes”

When attempting to analyse and investigate a particular event, it is ideal to look back into history to find out how markets reacted during that period in time. The good news is that historical data does tell us that financial markets have been relatively resilient to past infectious epidemics. The MSCI World Index is a collection of 1655 counters from developed countries, including Japan, Hong Kong and Singapore. From the MSCI World Index chart below, we can conclude that the global economy was relatively resilient to infectious epidemics. Approximately three months after the SARS epidemic, the MSCI return 16.36%.2 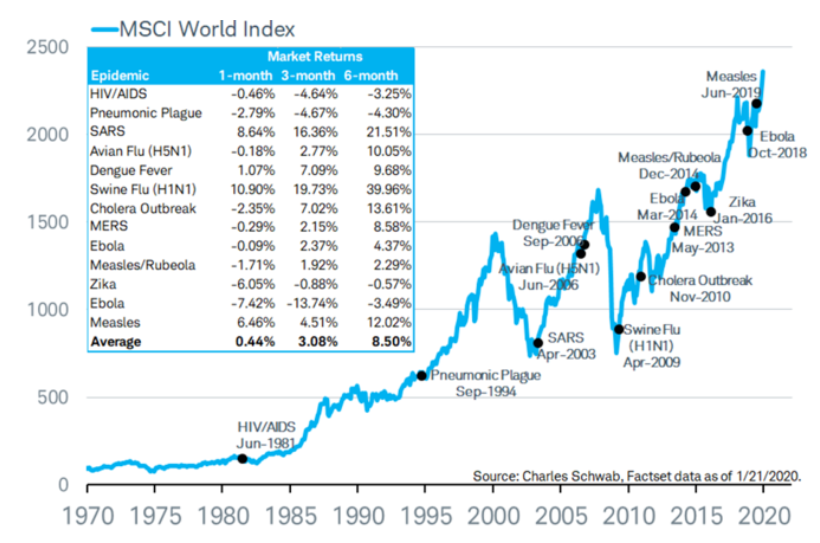 In our opinion, the closest parallel to the coronabirus was the SARS epidemic. According to data gathered from WHO and the Centres for Disease Control and Prevention,  the SARS epidemic resulted in 8100 infected and 774 deaths. The fatality rate of SARS amounted to 9.5%.3 The fatality rate of Covid-19 ranges around 2%4 (subjected to change) as of early February 2020.

Given the similarities between SARS and Covid-19’s outbreak, we decided to investigate the impact that the SARS epidemic had on open economies such as Hong Kong and Singapore. The first case of SARS in China was reported on Saturday 16 November 2002. Therefore, we used Monday 18 November 2002 as the start date to analyse how markets would react to the SARS epidemic.5 Similar to the MSCI World Index, an initial 3-month decline was followed by a strong uptrend a year later.

In an event of an epidemic outbreak, industries such as tourism, and its several economic and sub sectors such as transport, hospitality, and retail spending will feel the first brunt of impact. Below is a table of the counters and their respective industries that were affected.

During uncertainties, Gold and other precious metals are often favoured. However, not all industries will feel the brunt of the bear market. According to table below, healthcare supplies and glove manufacturing counters have seen their counters appreciate.

If one believes that the information factored into certain counters affected is temporary and reflects something shorter than his holding period, it may be wise to long and value cost average into these respective counters with strong balance sheets and free cash flow stability.

However, if one believes the uptrend in certain counters was due to a knee jerk reaction or that the down trend is going to continue, it may be ideal to short these counters. CFDs are popular tools used for short selling as they have no contract expiry date and can bypass the need of share borrowing. Check out our guide on CFD short selling here!

Hedge Your Portfolio against Rising Uncertainty

Contrary to popular opinion, CFDs are not restricted to technical traders. Long term investors can utilise CFDs to hedge their positions against unforeseen events and uncertainties.

1) When the price of your existing positions has already moved/is moving against you.

A practical application for most buy and hold investors would be to use CFD indices for hedging. This is an alternative to using a CFD to short sell each individual counter which they are currently holding. The benefits of hedging using CFD indices is that CFD indices generally have minimal commission fees and low margin requirements. 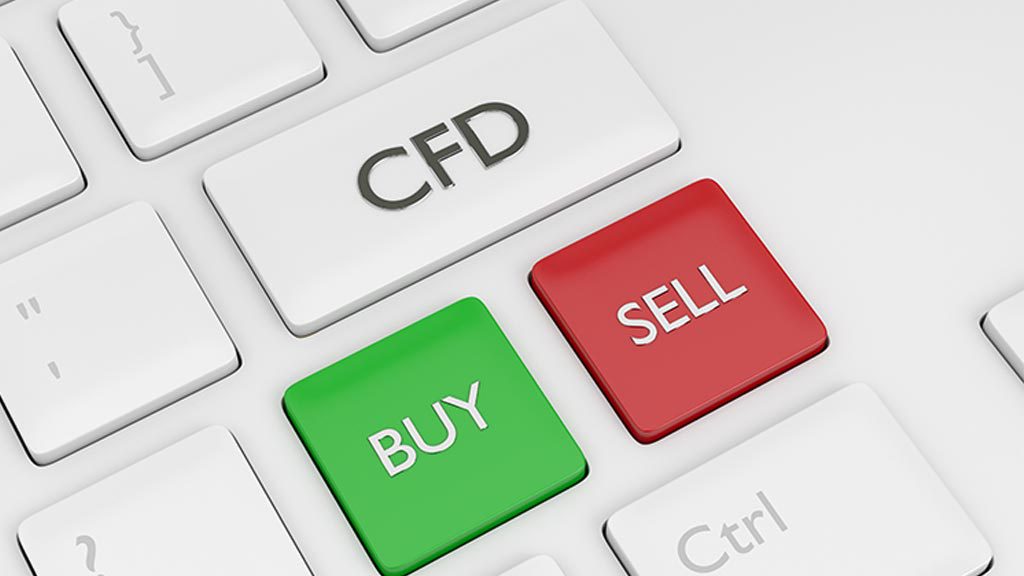 George is a long-term investor with a $100,000 portfolio of stocks. Assuming most of George’s equity holdings are main constituents of Index X.

Let us assume the following:

Given the price of Index X, George would need approximately 30 contracts to perform a partial hedge.

A decline in the value of George’s equity portfolio would have been potentially offset by the gains in his short index position.

Do note that this example is just a conceptual example on hedging. Charges such as commission and financing charges are not included in this example.

“Mr Market’s job is to provide you with prices. Your job is to decide whether it is to your advantage to act on them. You do not have to trade with him just because he constantly begs you.”

Truth be told, no one has a crystal ball that can predict when an infectious epidemic will come, or when it will end. In my opinion, the best way to deal with such events is to learn from history and focus on what you can control. You can control your emotions and the price you pay. I sincerely hope that you have found value in this article. Till next time folks!

Begin your Trading Journey with us!

What is FX CFD & Why Should You Trade Them?

Did you know that the forex market is open 24 hours a day, and is the world’s largest market in terms of daily transactional volume?  Understand the basic fundamentals of Forex trading with us!