Alex is a dealer for Contract for Differences (CFDs) and has experience in intraday trading of the equities market. He is a strong advocate of utilizing volume in confluence with various trading methodologies to identify the momentum of the market. He graduated from Singapore Institute of Management (University of London) with a Bachelor’s Degree in Economics & Finance.

In his free time, Alex enjoys trading in the FX market.

What this article is about:

The Hang Seng Index or HSI is the main benchmark of the Hong Kong stock market, widely followed by investors. As of 15 March, it has 55 constituents, covering 54% of the exchange’s market capitalisation.

In 2019, InfoTech, led by the Chinese tech giants, overtook financials as the index’s largest industry by market value [1]. Two years on, the Hang Seng Indexes Company (HSIC) – which maintains the index – plans to increase the number of constituents in the index’s biggest overhaul ever. This move will reflect the growing dominance of mainland Chinese companies, particularly the high-valued tech groups.

After one month of consultations with stakeholders, HSIC has proposed the following changes:

1) Expand the number of constituents in the index to 100

On 15 March, three stocks were already added to the HSI, bringing its total constituents to 55 from 52. The three were Beijing-based hot-pot restaurant chain Haidilao International, Hong Kong-based property investment holding company Longfor Group and Alibaba Health Information Technology. Alibaba Health rallied 7.5% while Haidilao added 6.4% after the review was announced. Longfor chalked up a 2.4% gain by mid-day trading [2]. HSIC intends to increase the number of constituents to 80 by mid-2022 and subsequently to 100.

2) Constituents to be selected from seven industry groups

The index’s current constituents come from 12 industries. These will be consolidated into seven industry groups to better represent the major industries in Hong Kong’s stock market. Financials and InfoTech currently dominate the market, accounting for the lion’s shares of the HSI at 40.89% and 25.93% by weighting respectively. 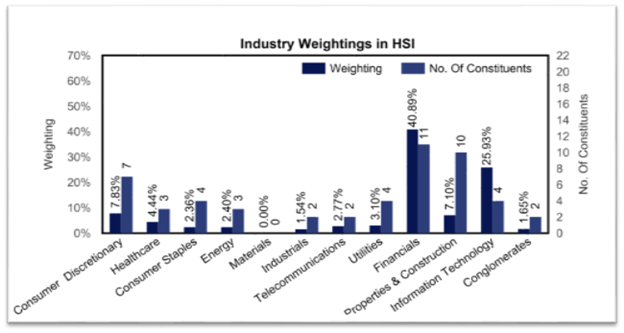 The listing history requirement for stocks eligible for inclusion in the index will be shortened to three months. Currently, new listings on the Hong Kong stock exchange ranked below 25th by market cap must wait 24 months to be considered for inclusion in the HSI. Companies ranked above 25th must wait 3-18 months before being admitted to the index.

The change will start from the May 2021 index review and take effect in mid-2021. This is to facilitate the timely addition of new listings and prevent HSI from lagging behind in the inclusion of stocks that accurately represent the Hong Kong market.

HSIC will maintain a minimum of 20-25 constituents that are classified as Hong Kong companies in the HSI to ensure adequate Hong Kong representation. This is because the HSI is supposed to track the Hong Kong market. The 20-25 companies will be evaluated every two years.

5) Implementation of 8% weighting cap on all constituents

Lastly, each stock’s weighting in the HIS will be capped at 8%, down from the current 10%. Concurrently, the cap for secondary listings or listings that carry unequal voting rights, including Alibaba, Xiaomi and Meituan, will be raised to 8% from 5%. 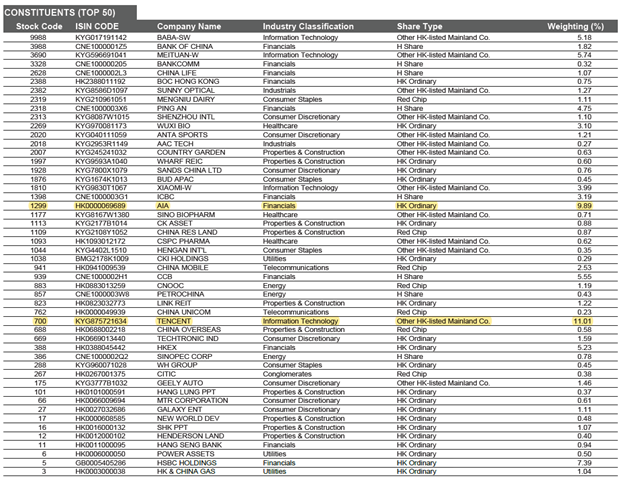 Stocks with unequal voting rights such as the three tech behemoths – Alibaba, Xiaomi and Meituan – are potential winners as they are no longer limited by the weighting cap of 5%.

That said, recent political risks associated with Alibaba may still put off investors. Recall the Chinese regulators’ abrupt blockage of Ant Group’s S$37bn blockbuster IPO in November 2020. This soon developed into a flurry of antitrust investigations into Alibaba’s business practices. To top it off, Alibaba has been asked to divest its assets in the media sector owing to its growing media influence.

The weightings of consumer and healthcare stocks will increase by four and three percentage points respectively, at the expense of the financial sector, according to a research note put out by Goldman Sachs.

According to Smartkarma, Kuaishou Technology, NetEase, JD.com, Xinyi Glass Holdings and Country Garden Service Holdings may also be potential inclusions on the back of the expansion of constituents.

Chinese companies generally will be the greatest beneficiaries of the overhaul as the index makes room for more and more of these listings.

The biggest losers will be stocks in finance as they have the highest weightings in the index currently. After expansion of the number of constituents and adjustments to weighting caps, the sector’s weighting will be diluted to 34.9% from 40.89% [5].

Hong Kong firms may struggle to preserve their weightings in the index – their aggregate weighting could fall to 32% from 40% – as Chinese companies’ weightings increase, Goldman added.

Lastly, other losers may include constituents that could potentially be removed from the HSI such as Bank of Communications, China Life Insurance, WH Group and Hengan International. 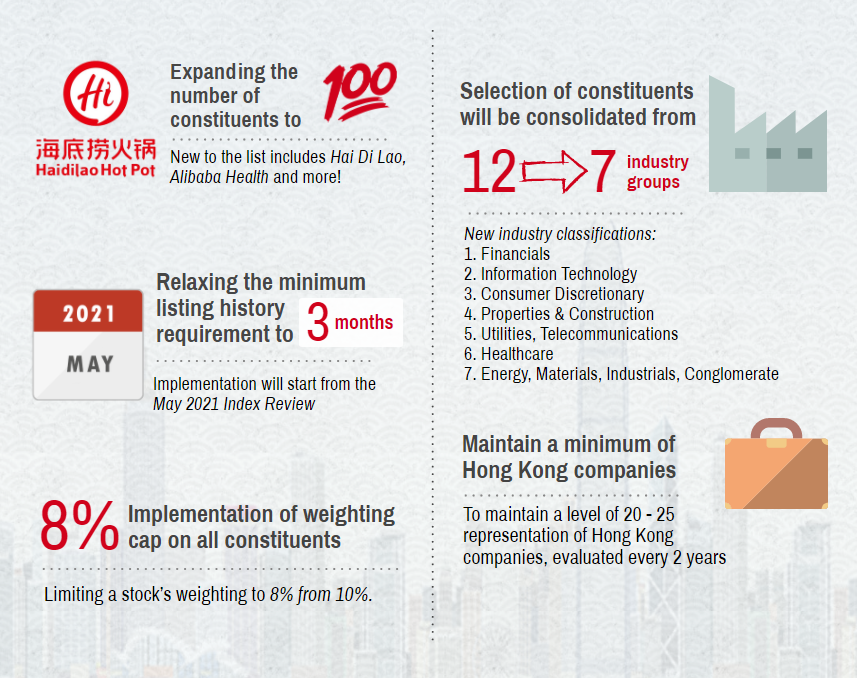 HSI has been lagging its global peers in updating its weightings, which are still tilted towards old-economy stocks such as banks. Other benchmark indices such as the S&P 500 are already tech-heavy, reflecting tech’s rapid encroachment in the past two decades.

This overdue revamp will allow the HSI to include mega-cap Chinese tech companies while maintaining room for a minimum 20-25 Hong Kong companies. Easing the minimum listing requirement will also enable the index to quickly embrace new, large IPOs that will not only better represent the Hong Kong market but also increase its appeal.

Finally, the revamp is seen as good news for the ETF industry as more funds are attracted to track the index. Goldman expects passive funds tracking the HSI to grow to US$25bn from the current US$20bn. More diversified memberships and higher weightings of new-economy stocks will help the index’s performance as a whole, according to fund managers. Paul Pong, managing director of Pegasus Fund Managers, reportedly predicted that “As more new-economy firms join, the index is likely to test the level of 40,000 in the future”. [6]

Start trading our brand-new Micro HK CFD Trading for selected counters on the Hong Kong stock exchange today! CFDs allow you to long the winners and short the losers of the HSI revamp. With our Micro HK contracts, no counters will be too expensive for you or out of your reach as you can trade smaller than board lot sizes.

Figure 4: Comparison between equity trading and CFDs (for illustration purposes only)

Figure 4 illustrates how Micro HK CFD Trading may assist you. For more details on the benefits of trading Micro HK CFD contracts, check out our recent Market Journal.

So what are you waiting for? Start trading CFDs with us now!

The Opportunities in China's New Economy

What are the opportunities that investors could look for in the China’s new economy? Read our latest article to find out more about the China market!

Take advantage of Volatility! Embrace it, Don't Fear it!

2020 has been an eventful year which has led to spikes in market volatility. Ride on the wave of volatility and learn how you can take advantage of the volatility by trading CFDs

US Small Caps as an Economic Barometer?

Did you know that US small-cap stocks are often perceived as a reliable economic barometer of US economic activity? Read this article to learn more!