Yong Shern is a passionate CFD dealer who has always aspired to discover trading opportunities via a blend of different research methodologies. Prior to joining PhillipCapital, Yong Shern was an intraday equity trader in one of the top broker firm in Malaysia. He graduated with First Class Honours in Business Administration with a major in Banking and Finance from the University of Malaya.

Yong Shern is experienced in both trading and research in various financial products. These products include equities, indices, commodities, forex trading. He has successfully crafted trading strategies to navigate this volatile oil environment. In his free time, Yong Shern enjoys following the latest market news with the aim of helping clients navigate through various market conditions.

“If you don’t own Gold, you know neither history nor economics”

Looking for security amidst volatile and uncertain times? In the current market situation brought about by covid-19 pandemic, we have seen gold’s strength in portfolio hedging and preservation and may be worthwhile adding to your investment portfolio.

In this article, I will attempt to share with you the benefits of owning gold as a form of diversification and my insights about how gold behaves with respect to the MSCI World Index in turbulent times.

Instead of trying to predict Mr Market’s next move or the arrival of a crisis, it would be more productive implementing defensive strategies to hedge against such uncertainties and turbulence. Generally, Investor and central banks view gold as a global store of value, and often use it as an effective hedge against currencies.

Figure 1: Gold Performance w.r.t the MSCI World Index during the last 6 business contraction cycles in the US2

Figure 2: Gold Performance w.r.t the MSCI World Index during the last 6 business contraction cycles in the US (Bar Chart Variation of Figure 1)

In macro-economic theory, during recession, central banks across the world will cut interest rates to provide stimulus to the economy. On Black Monday, also known as the Stock Market Crash of 1987, the Fed decided to cut interest rates. Its benchmark rate was 7.25%, so a 50 basis cut was not especially significant. In 2000 when the US economy entered recession, the Fed’s benchmark rate was 6.5%. During the “Great Recession” that started in late 2007, the Fed’s benchmark rate was 5.25%. Therefore, there was room for further rate cuts. On 4 March 2020, the Fed slashed interest rates by 50 basis points to 1.25%. This may give the US economy very little room to cut rates in the event that the US economy enters a recession. The Federal Reserve will maintain the Fed rate to 0 to 0.25% until it is confident the economy has weathered the coronavirus pandemic and is on track for maximum employment and price stability goals.3 Will the U.S. see negative interest rates like Switzerland and Japan? 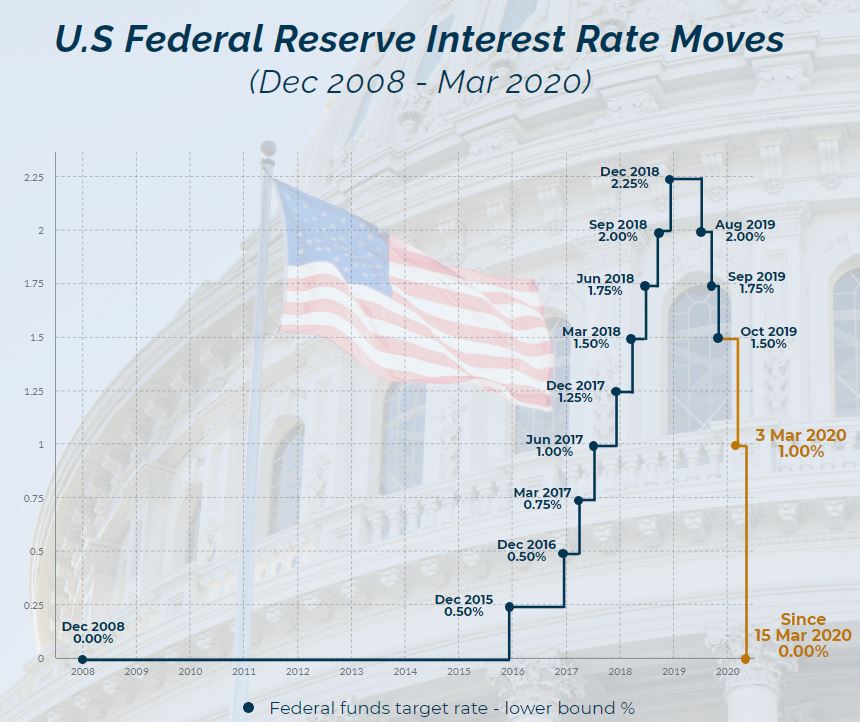 Turbulent times like this encourage investors to shift their funds to safe haven assets such as gold and high yield instruments. This has thus resulted in a surge of prices in both gold and defensive stocks. Bridgewater Associates, the world-renowned hedge fund founded by Macroeconomic Investor Ray Dalio increased its SPDR Gold Shares to 579,692 in Q4 2019. This is a 20% increase as compared to the same period in Q4 2017.5,6,7 Sandler Capital Management, touted as one of the best stock-picking funds in 2019, also increased its stake in the SPDR Gold Trust by nearly $38 million USD. This is an increase of 180%.8

In my opinion, gold has a place in every investor’s portfolio. I decided to investigate gold’s return with respect to the other indices. According to Figure 4, gold moved in line with equities during the bull market, providing higher capital gains then the indices sampled in Figure 4. During the period of January 2001 towards the end of 2019, Spot Gold recorded a CAGR of 9.53% which outperformed the 3.61% CAGR recorded by MSCI World Index.

However, in bear markets, based on Figures 1, 2 and 4, gold had an inverse correlation with the respective indices. Therefore, this supports our above-mentioned analysis that gold acts as an effective hedging tool. 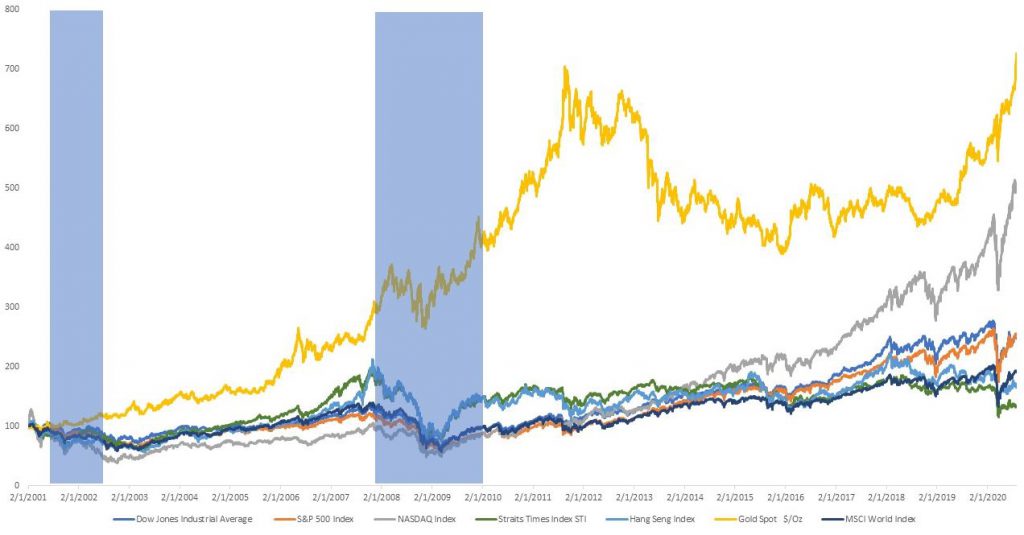 When is the right time to buy gold?

Finding the right opportunity to incorporate gold in your portfolio can be tricky! We encourage all readers to include gold during the inception of their portfolios. This is because buying gold during crisis may be too late for hedging as prices may have already been factored in.

How do I take a position in gold?

If I want to take a position in gold, does that mean that I have to head down to the nearest jewellery shop to purchase it? Where can I store my precious metals?

The good news is you do not need to own physical gold to take a position in gold. Here are some investment products that you can consider based on your investment profile:

i) Contract for Differences (CFD):

CFD allows you to long or short Gold with just 20% margin and participate in the price movement of the underlying Spot Gold directly with minimal capital and costs. Besides Spot Gold, CFD also offers other gold-related securities such as gold miners and various ETFs.

With more than six types of gold futures being offered at PhillipCapital, you may participate in the short-term price fluctuations of the respective futures contract. Futures contracts can also be initiated with initial margins.

Gold-related unit trusts funds are managed by professional fund managers, with combinations such as commodities, gold miners, cash and other components that are engineered by the managers to maximise the performance of the funds in the long run. PhillipCapital offers up to 10 gold-related unit trust funds from different issuers. You can invest in gold with the flexibility of settling in cash or Supplementary Retirement Scheme (SRS), depending on the settlement conditions of each fund.

With ETF, investors can involve themselves in gold bullion market through trading or holding securities on various regulated stock exchanges in a cost-efficient way. SPDR Gold Shares are one of the popular ETF being listed in several exchanges and one of the most liquid listed Gold ETFs. We have come to the end of this article! I sincerely hope that by reading this article you will have a better understanding of hedging and the benefits of owning gold.

If you’re interested in trading gold and silver, here is the list of CFDs that we offer:

If you have any questions on trading or investing, feel free to drop us an email at cfd@phillip.com.sg and we will be glad to assist you through your investment journey. There are also FREE CFD seminars that you can attend to learn more about this derivative product! Be sure to check out our other gold articles too.