4 reasons why Gold should be part of your portfolio

All that glitters is not gold. At least that can be said when it comes to investing in gold. I am sure you will agree that like every other tradable instrument out there, gold has its ups and downs and if you were to buy (long) or sell (short) at the wrong time, your investment account will be in red for a prolonged period.

However, every seasoned investor out there will tell you that gold MUST be part of your portfolio. Some say 20%, others say 50% of your portfolio should be in gold. I say these are just numbers. At the end of the day plan your investments accordingly. As long as you don’t have all the eggs in one basket, you should be fine. The more important question to ask is why. Why should gold be part of my portfolio? Did you ever notice that every time a significant event occurs, gold is being mentioned? During the 1930s Great Depression, we saw the emergence of the Gold Reserved Act in the United States. Individuals were forced to sell all the gold in their possession to The Treasury. More recently, during Brexit, the French Elections and the Tsunami, we saw significant movements in the price of gold. WHY IS EVERYONE OBSESSED WITH GOLD?

Gold and Silver are the world’s longest-surviving “currency”. Sure, you may say that gold is not a currency per se but since the day it was used in trade, gold has survived and maintained its value. After gold, mankind has created many other forms of currencies, known today as Fiat Money, like the US Dollars and Singapore Dollars.

According to Investopedia, Fiat money is a currency that a government has declared to be legal tender, but it is not backed by a physical commodity. The value of fiat money is derived from the relationship between supply and demand rather than the value of the material that the money is made of. Historically, most currencies were based on physical commodities such as gold or silver, but fiat money is based solely on the faith and credit of the economy.

Looking at the history of currency, about 609 currencies have been created and failed. Some surviving for only 1 month while others like the French Livre Tournois survived for as long as 591 years. Most of it faced devaluation and hyperinflation while others were destroyed during the war, rendering it unusable.

Up until the second world war, The British Sterling Pound had been the world’s reserve currency. However, the war severely devastated the British Empire from an economic standpoint, causing the sterling pound to retreat and US Dollar to take over its place. At that time the value of the US Dollar and many other currencies in the world were determined by the gold standard.

In 1931, Britain abandoned the gold standard and the US followed suit in 1933, bringing in place the Fiat money system, and later, on 15th August 1971, completely cut all ties of US Dollars to gold. US President Richard Nixon made several announcements that would go on and change the history of currencies.

On Sunday, 15th August 1971, Nixon declared that he will break all links between the United States dollar to gold. An announcement that would affect millions of American lives. Even till today, after 46 years, many continues to debate over his actions, one that is considered a huge political success but an economic failure. His announcement caused a tremendous blow to the US Dollar where it lost a third of its value and, some say, it doomed his presidency.

Nixon’s argument was simple. Delinking the US Dollars from gold would empower the Federal Reserve to use monetary policies to increase the general wealth of the American people. Or did it? Is that why we tune in closely to Janet Yellen’s speeches every month? Is that not why every time there is a rate hike, stock market, and gold prices go haywire? I hope you now see how, by going through the history of gold, did it become so important to investors and this is probably why everyone is obsessed with gold.

Well, that’s debatable. While some argue having the Federal Reserve to intervene is good, others would say it is just a piece of paper with some value because a government says it is. The good thing (or bad) is that governments can now print as much money as they like. Is this why the US can be in US$20 trillion debt and still operate? It’s another huge debate and I will leave you to make your own conclusions here.

Well, this is straight forward. Gold is an excellent hedge against both inflation and deflation. Many of us have lived through a period of inflation, at least, on average things today are much more inflated than it was in 1993. And so has the price of gold.

Gold prices have continued rising and has hit a 7 year high! Let’s look at the current price of gold as of 21 February 2020. 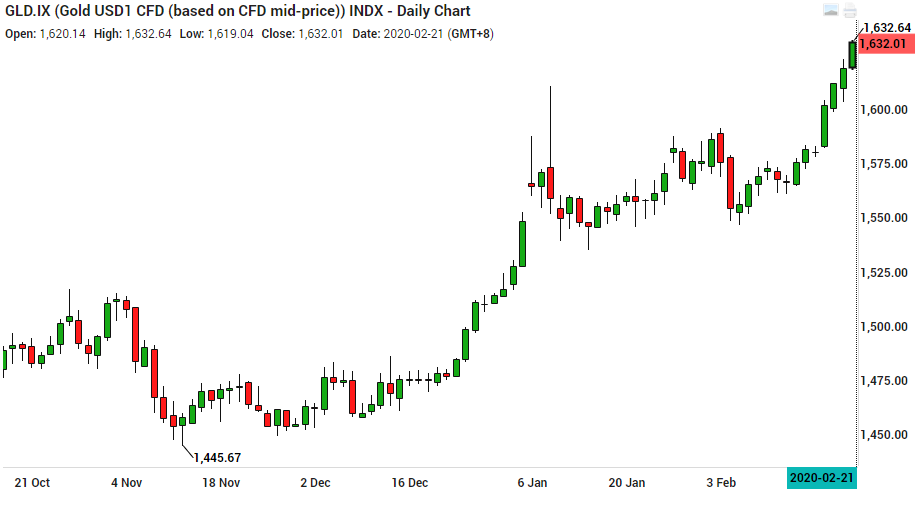 This is one reason why many investors allocate a portion of their portfolio for gold. Did you know, you could use up to 10% of your investible savings in CPF Ordinary Account to invest in gold? Check out the CPF Investment Schemes.

The same works for deflation. The last time we experience this was probably the Great Depression in the 1930s, and based on what I have mentioned previously about the Gold Reserved Act, you can see that demand and prices of gold soared during those periods too.

Let’s face the fact, like oil, the amount of gold on earth is limited. There are only so much that can be mined. There is no way gold can be created, at least not at this point in time. Hence supply is limited but demand for gold has been rising over the years. Here’s a look at the gold demand chart

Basic economics will tell you, with a high demand and low supply, prices will…? Go up! Also, do note that gold is not used as jewellery or stored in gold bars only. It is used in tonnes of items, right from the device you are reading this to medicines to space vehicle. You’ll be surprised by the number of items that have gold in them.

Based on the previous 3 points, you would probably establish why gold is so important and why it can hold its value. You probably also agree that the Fiat Money system is not proven and would probably fail one day. This is one of the main reasons when certain events take place, the price of gold soars. Take a look at the previous financial crisis in 2007/2008. When stock markets were crashing, the price of gold was hitting new highs. And although we are way past that dark period, the price of gold has maintained above that levels. And if you are a firm believer that a crisis happens every 10 years, it is probably time to make space for gold in your portfolio. Remember, 1987 Black Monday saw a massive stock market crash, 1997 was the Asian Financial Crisis, 2007 triggered the Global Financial crisis and 2017 will be? Sovereign Debt Crisis maybe?

For those of you who prefers physical gold, you can explore into that too but remember you will need a safe storage space for it.

That’s all for now folks.

For more information on our Gold USD1 CFD, kindly refer to the contract specification and pricing pages.

For more information on our Gold USD100 CFD, kindly refer to the contract specification and pricing pages.

For more information on our Silver USD50 CFD, kindly refer to the contract specification and pricing pages.

YES, I WANT TO START INVESTING IN GOLD!

All of us have different reasons as to why we started investing. Some of you might have read my previous article on “3 Reasons To Start Investing… NOW!” and in it, I mentioned about compound interest….

23 million people. 150 million sheep. Yep, that’s the land down under a.k.a. Australia. If you happen to chance upon my previous article or video, you would know that Australia has been the second best-performing stock market…

Many of you have probably heard the story of the 2 salesmen who went down to South Africa in the early 1900s. The first one came back and reported, “Situation hopeless, they don’t wear any shoes!”…

What is ETF Trading?

Markets are buzzing! Are you? The Dow Jones Industrial Average has been hitting new highs in 2017. Amidst all the news about the vibrant US Market, there is a little boy growing up behind the scenes called ETFs…

As in the words of Peter Lynch, “If you don’t study companies, you have the same success buying stocks as you do in a poker game if you bet without looking at your cards.” I can say, almost certainly, that 80% of investors…

Confused when to exit a trade? Not sure if you should take profit? Here we discuss a trading strategy that you could always use in times of uncertainty. Never be left out on what is available for you.

You may wish to obtain advice from a qualified financial adviser, pursuant to a separate engagement, before making a commitment to purchase any of the investment products mentioned herein. In the event that you choose not to obtain advice from a qualifies financial adviser, you should assess and consider whether the investment product is suitable for you before proceeding to invest and we do not offer any advice in this regard unless mandated to do so by way of a separate engagement. You are advised to read the trading account Terms & Conditions and Risk Disclosure Statement (available online at www.poems.com.sg) before trading in this product.