Kah Chee graduated from Nanyang Technological University with a Bachelor’s Degree in Accounting. With more than 10 years of experience as a full time, professional investor and trader specialising in the Hong Kong and US markets, he employs fundamental and technical analyses with experience in a multitude of financial instruments.

What this report is about:

In our article on 25 March 2021, we discussed the potential winners and losers of the Hang Seng Index’s biggest revamp in its 51-year history. Since then, there have been major changes in China’s and Hong Kong’s stock markets. In this Part 1 of our 2-part series, we focus on their impact on the technology sector. 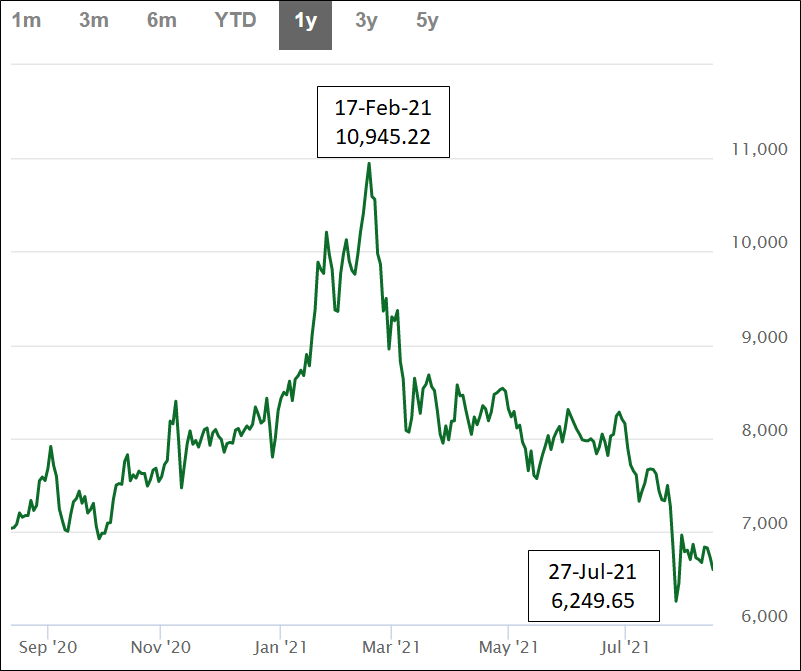 Despite its huge tumble and ongoing regulatory risks, investors are still very keen to have exposure to the technology sector in China.

Attractiveness of the China and Hong Kong technology sector

The China Internet Network Information Center estimated that at the end of December 2020, China had 989mn Internet users. This was almost three times the entire US population.  Primarily on mobile phones, 782mn of these users shopped online while more than 900mn streamed videos online. With a growing Chinese middle-income population, many of the colossal Hang Seng Tech Index constituents, whose valuations are currently attractive, still have substantial room for growth.

A unicorn company is a privately-owned start-up valued at more than US$1bn. There were 251 unicorn companies in China as at December 2020, out of a total of 590 worldwide, according to Greatwall Strategy Consultants in April 2021[2].  The majority of them, if successfully listed, would fall under tech stocks and could be screened for inclusion in the Hang Seng Tech (HSTECH) Index. With current negative sentiment on listing in the US, many of these unicorns could be motivated to list on the Hong Kong Stock Exchange (HKEX).

China’s 14th Five-Year Plan (2021-2025) is different from its predecessors in that it does not emphasise GDP growth. Rather, it emphasises – in terms of chapters dedicated – domestic socio-economic development (14%) and supporting innovation and technological advancements (14%)[3]. 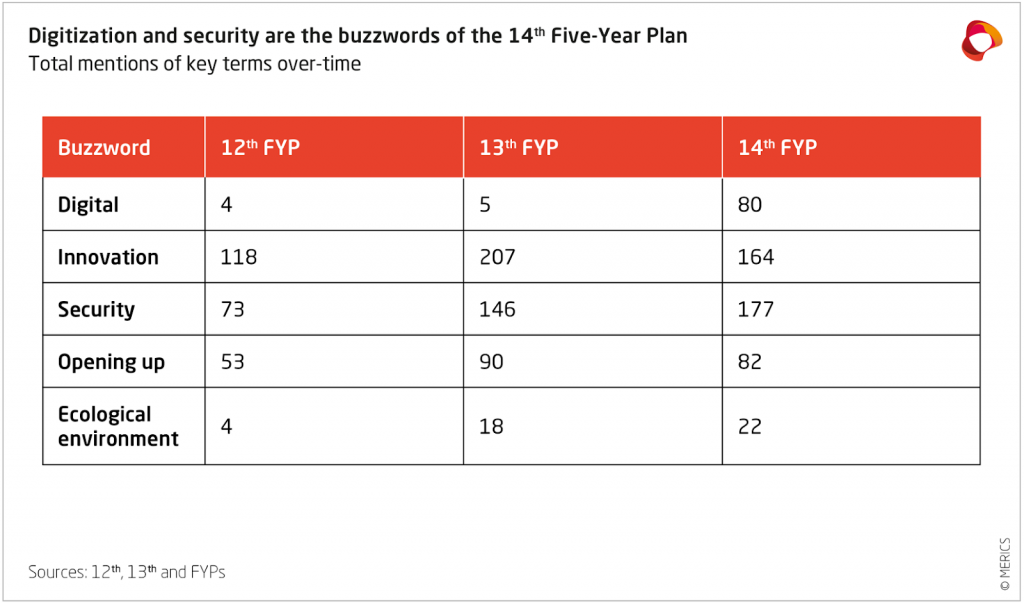 Compared to its 13th Five-Year Plan, there is significantly higher emphasis on digitalisation[3] 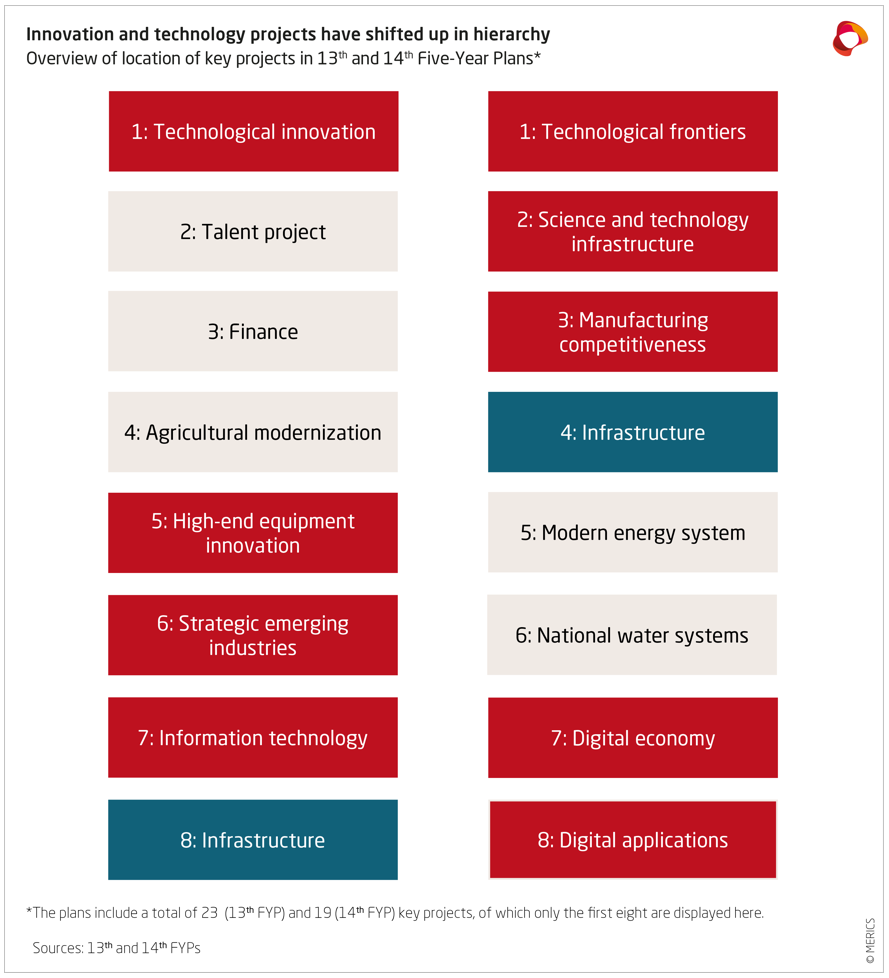 Special projects in innovation and technology have been given higher priority by the 14th Five-Year Plan.[3]

China’s ambition is to become a leading innovative country by 2035. As such, further fiscal policies, grants and subsidies can be expected to boost its technology sector.

However, there are also headwinds for Chinese equities.

Relentless trade restrictions, international sanctions and the threat of delisting Chinese government-linked and technology companies from US exchanges have increased the risks of US-listed Chinese entities.

Four years and more of a US-China trade war[4], under two different US Presidents, have exerted considerable pressure on Chinese companies, particularly the tech players. This has increased their share-price volatility. 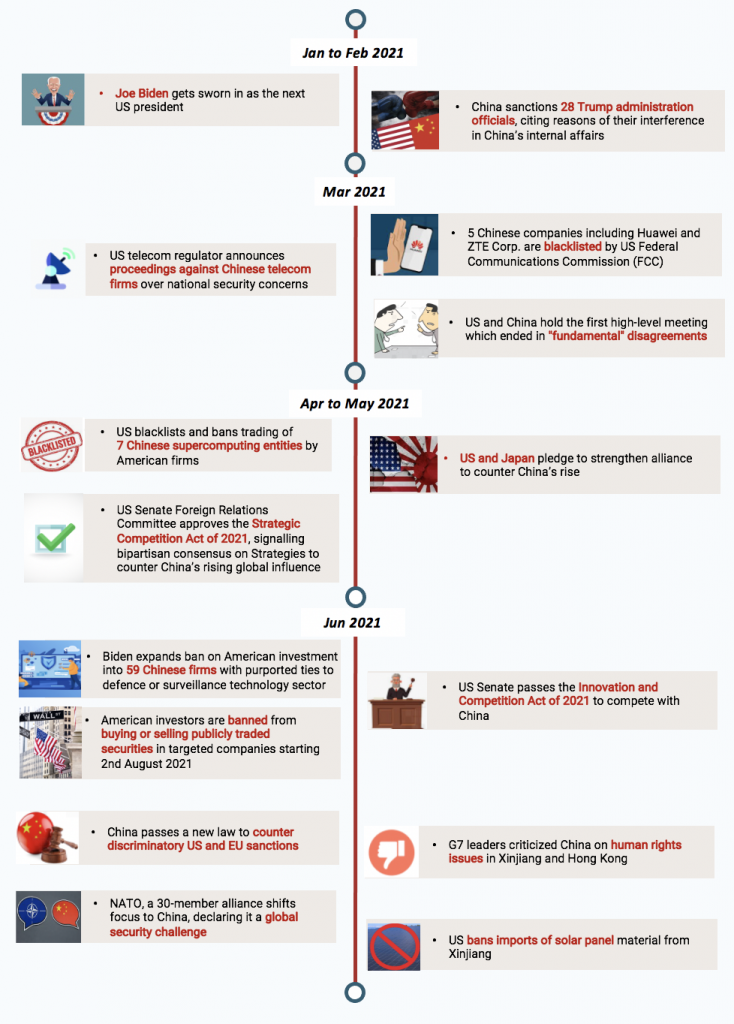 As of 5 July 2021, the value of all 245 Chinese companies listed directly or as American Depositary Receipts on US stock exchanges was around US$2tr. This formed a hefty 15% of the total market capitalisation of the Shanghai and Shenzhen stock exchanges, at US$13tr. [5][6]. Should the threat continue to escalate, such negative sentiments in the U.S. could substantially benefit Hong Kong as an alternative listing destination for Chinese companies.

China’s Internet regulators are tightening their grip on tech giants’ business structures and operations. Alibaba, Tencent, Meituan, and DiDi Global have all not been spared. They are among the latest scrutinised recently.

China’s greatest display of its determination to rein in its tech behemoths was its 11th-hour scuttling of Ant Group’s IPO last November, citing risks to consumers from Ant’s online banking structure.

China has been mainly targeting monopolistic behaviour such as forced exclusivity on e-commerce, social and streaming platforms. Forced exclusivity refers to Internet platforms’ restrictions on their online vendors, celebrities or influencers from cross-selling or marketing on competing platforms. This is deemed anti-competitive and an impediment to innovation.

China’s Internet giants have also been accused of the compulsory collection and abuse of consumers’ personal and consumption data.

This shake-up has resulted in sharp market corrections and elevated risks for the Chinese tech sector. The flip side of it is that forward P/E valuations for big tech names like Tencent and Alibaba have fallen to the low 20’s. This makes them much more affordable to investors looking for exposure to the Hang Seng tech sector.

Despite attractive stock valuations, many foreign investors find it challenging to invest in China’s A-share and Hong Kong’s H-share markets, for the following reasons:

Attractive valuations, developed financial markets, robust regulatory policies, strong corporate governance, high market liquidity, stability of currency, ease of access and a diverse universe of securities are some of the reasons traders and investors remain attracted to the HKEX.

In addition, global trade and tech wars against China are expected to benefit HKEX as it becomes a haven for Chinese companies and unicorns seeking secondary listings or IPOs.

Given the strength of China’s domestic online consumption and the government’s exceptional support for technology and innovation, the Chinese tech sector remains poised for a multi-year bull run. The recent sell-off, thus, could provide unprecedented opportunities to hop onto its bandwagon.

Investors who wish to get exposure to the technological and innovative sector but face challenges picking stocks can consider our latest Hong Kong Tech Index HKD10 CFD.

However, against current strong volatility in the Chinese tech sector, investing in the sector may remain a roller coaster ride in the short term. Here’s how our Hong Kong Tech Index HKD10 CFD can help you:

There are other synergistic benefits such as pair trading strategies of using Hong Kong Tech Index HKD10 CFD with correlated Indices, which we shall cover in Part 2 of the article series. In Part 2, we will go through China’s economy, main features and key selling points of all 3 of our latest Hong Kong based Index CFDs! Do stay tuned for it!

For more information on our Hong Kong Index CFDs, visit our website here.

Check out our part 2 article:

Fun fact: Did you know? The Hong Kong Stock Exchange finished 2020 as the second-biggest IPO market globally! Read our latest article to find out more!

Can Value Still Be Found in Alibaba Group Holding?

Can Value still be found in Alibaba Group Holding? Read our article to find out more!

Who are the potential winners and losers for the revamp of the Hang Seng Index? Read on our article to find out more!